The Waiting (for bobbins) Is the Hardest Part

Until you just can’t take it anymore.

So, I finished up the fiber I was spinning on the mS(miniSpinner) onto the two bobbins it came with.  My favorite default is a three-ply yarn, but this fiber was bouncy, bouncy, bouncy, and it just does better as a two-ply.  My mS came with one bobbin made by Hansencrafts and one from Akerworks, a 3D printing company.  Reading the Ravelry boards, I learned that some people had a preference for the Hansen bobbins, so I wanted to try both of them before ordering.  After confirming I like the Akerworks bobbins just fine, I ordered two more.

Since they are made to order (so many pretty colors and patterns to choose from – my two will be purple and lilac, of course), it’s currently less than a week wait from ordering until they ship.  Also, due to being just different enough in the center diameter, plying also was going to have to wait until the jumbo lazy kate arrived, which could beat the bobbins here.  But like I mentioned, I still have the wheel, so I could spin on other things and wait.

That lasted two days.  The possibility of having to wait a whole week was just too much.  Then it hit me.  I mentioned to Ramblin that I don’t have to wait.  I can ply off of the mS bobbins using my wheel. There’s no rules about crossing the streams; I could spin on one machine and ply on another. I could make a lazy kate out of a box, but lamented that it wouldn’t be tensioned. He, being MacGyver, said that I could put a string over them and tension it.  (he doesn’t spin, but understands the whole process like whoa)  I’m pretty sure the two of us could take over the world if we put our minds to it.

This is a good time to discuss Personal Spinning Preferences.  On the Rav boards, lots of people don’t believe in extra bobbins.  Instead, people should just buy a quill attachment and cardboard storage tubes and wind off every. single. bobbin. spun. only to have to turn around and ply them.  Okay, let’s discuss how much time that takes away from being able to spin fresh, new singles of yarn (gently side-stepping the whole time cost of making yarn from scratch in the first place).  Uh-huh, that’s never going to happen here.  Also, many people believe that tensioned lazy kates aren’t necessary.  And that’s great for them.  I used an untensioned lazy kate for the first ten years I spun, and then for my 10th spinning anniversary, I bought myself a tensioned lazy kate.  After using it, I was really impressed that I never threw the untensioned one through a window.  For those that don’t need one, rock on with your bad selves.  I will turn into the Hulk if I don’t have one.

So, armed with a Sweet-n-Low box, spare knitting needles, sewing machine bobbins for spacers, string, and a strip from a cottage cheese container, I made my tensioned lazy kate.

That’s after I plied everything off, as the pictures before were dark from cloudiness outside.  Turning on a light beforehand just didn’t occur to me as I was a woman on a mission. 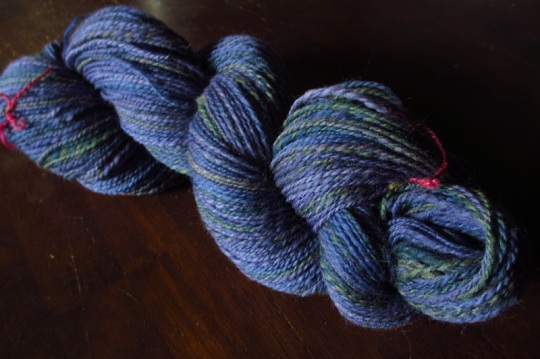 You can tell by the picture that the fiber just wants to bounce.  Targhee could easily be called Tigger fiber.

Gee, there’s once again two empty bobbins.  Whatever shall I do with them?  :)

Update:  The lazy kate has shipped, but the bobbins aren’t scheduled to until July 28.  Argh.

Not really all that random