A few years ago, a friend brought her Hansencrafts miniSpinner to the yarn shop and let us try it out.  It was sweet, and I knew I would probably have to get one someday.  But that really went to the back burner with all of our travel plans, and besides, I had my excellent wheel, the Majacraft Rose.  I was fine.

Fast forward to this past April when another friend got a miniSpinner.  Well hello, all those feelings of coveting.  But, I resisted the pull and thought that I should get a plan in place to save up for one, like finally selling some handspun yarn that’s been piling up and use those funds toward a purchase.

Last Wednesday, I get a message from said friend.  She wants to know if I want to buy her Hansen spinner.  What?!  She just bought it!  (Turns out, she bought another one already. She has a slight wheel/spinner acquisition disorder.)  So, Thursday, this arrives at my house. 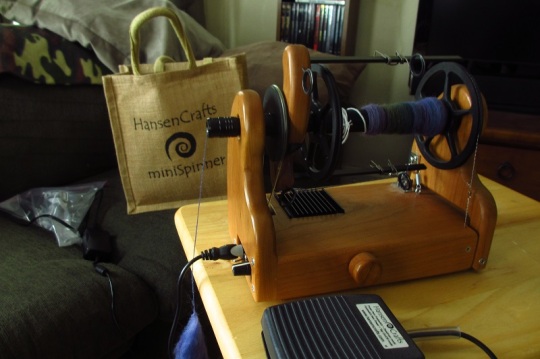 This one doesn’t have a Woolee Winder (yet), and it only came with two bobbins.  There are now two more bobbins on the way as well as a lazy kate because of course, neither of my two lazy kates will handle the huge honkin’ bobbins of the miniSpinner.

Now, have no fear – my wheel isn’t going anywhere.  In fact, I’ve been spinning on it this morning, just so it won’t get jealous.

But I do wish the other bobbins would hurry up and get here.  I just ordered them last night.

Also, the Illiana Yarn Crawl kicked off yesterday, so if you’re in the Vincennes area, I know where you can get some handspun. 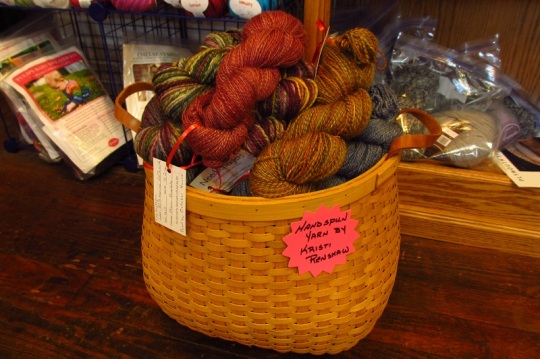 And if you miss that, don’t worry, there’s soon going to be more.  A whole lot more.  I kidded my friend about the Hansen spinning so fast it would create a vortex in her house and suck all the spinning fiber into it, thereby creating a vacuum that would suck in more spinning fiber from Etsy and the like.

Well, I suppose I’ll find out first hand.  It’s got its work cut out for it.

The Waiting (for bobbins) Is the Hardest Part