So, how’s the soap-making going, you ask?

Well, I’ve had to acquire a few new molds.

And a few more scents.

And I’m buying my coconut oil in a slightly larger size (though I would love to find a little bit bigger container for a reasonable price).

And I just ordered 12 pounds of lye.  So I guess the answer is – pretty good! 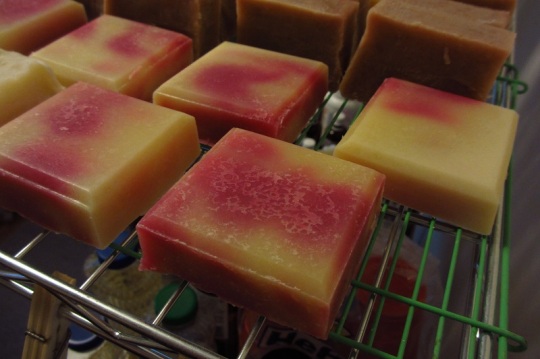 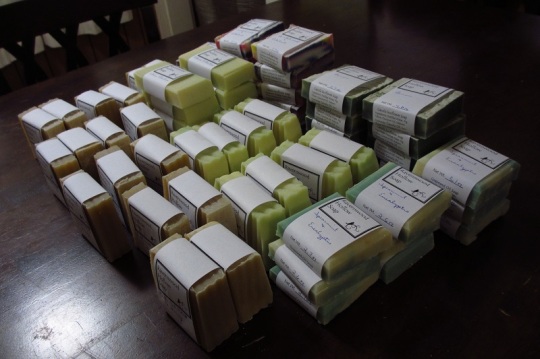 (The soap in this pictue is pretty much all gone.  You have to move fast.)

In the first batch of soap I made, I used lavender EO for half of it and sandalwood EO (14% dilution – you see where this is going) for the other half.  The lavender smelled wonderful.  The sandalwood – smelled vaguely like shortening.  Have you smelled shortening?  Not a lot to enjoy there.  And since I am all about the scent in this endeavor, this would not do.

Fortunately, there’s a way to fix some things that might go wrong with your soap, and not enough scent is a relatively easy thing to fix by rebatching.  I read a few different sources on rebatching, and more or less followed the instructions here.

First, you need to shred the soap in question.  I started off with about 36 oz.  That was a lot of shredding.  I only got a knuckle right at the end of the last bar.

This was dumped into a five-quart crockpot, dedicated to soaping or dyeing yarn or some other such crafty thing I’m doing.  A rebatch needs liquid added to reconstitute the soap into a less solid form, and the experts say this is a great time to add goat’s milk.  Sounds like a great idea!

I used canned goat’s milk since I didn’t have access to fresh at the time.  I also added in more scent (oatmeal, milk, and honey FO) and a bit of water to get it all moistened.

I let it go for about 1 1/2 hours, stirring about every half-hour.  I did not get a picture of the resulting goo, but it was about the consistency of petroleum jelly.  We then mooshed it into the mold lined with parchment paper.  Schwan’s freezer boxes are awesome for this!  We already have them, might as well put them to good use.

We left it in this for a couple of days, then unmolded and sliced it.

Because the soap had already cured and no additional lye was added, the soap is essentially ‘done’, but it does need to dry out.  The soap was rather spongy in texture immediately after slicing, but now that it has been a couple of weeks, it’s much more firm.  I’ll give it another two weeks to harden before using.

And most importantly, it now smells amazing.

In non-soaping news, the lemon soap we’ve made has given us serious lemon cravings.  I baked a lemon cake a few weeks ago, and tonight I made lemon bars.  The modifications I made were to add 1/4 tsp. of salt to the crust and used 2/3 c. of lemon juice for the filling.  Mmmm . . . lemon. 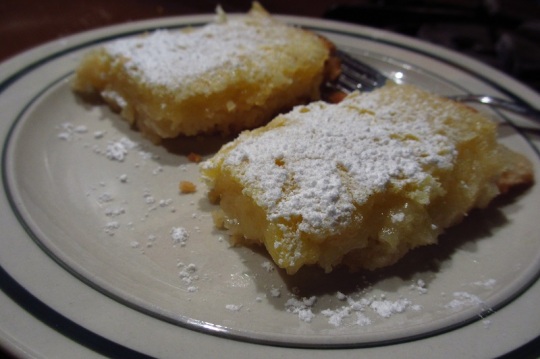