Fifteen years together.  It’s flown by, but I feel like I’ve known you forever. 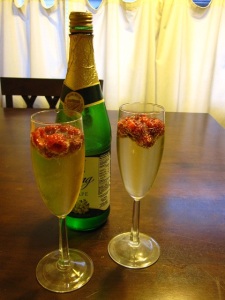 I love you, Sweetheart.

Yes, I’m 18 days late in acknowledging that.  Clearly, ending procrastination was not one of my resolutions.

While I don’t know what all 2012 may have in store for me, I do know a couple of things:

You’re probably not supposed to use bullet points on less than three items, but meh.  I have plans to continue eating better, getting back into exercising regularly after the ankle injury (I was on a great streak, too!), and using up stash yarn and fiber I’ve had forever.  My grandmother left all sorts of things in like-new condition because they were too ‘nice’ to use.  But you don’t get any enjoyment out of those things.

I’ve been trying to finish up lingering projects also.  Here’s the first project finished in 2012.

I started this afghan in December 2008, worked on in through January 2009, then stopped.  No idea why.  Probably something other new shiny thing grabbed my attention.  My goal is to work up all the languishing projects or rip them out.  I want to work on a regular project, a sock project, and a spinning project each month.  According to Ravelry, I have four projects ‘in progress’ and three in hibernation.  There are five more I have listed in hibernation, but those are just waiting on buttons/zippers/pictures of their finished state.  However, I’m afraid I haven’t been entirely truthful with Ravelry, and there are more.  Eeep.