Okay, so I didn’t post at all during the vacation.  I was too busy relaxing.  And taking photos.  Here’s the story:

Ramblin and I had batted back and forth the idea of a vacation, sometimes abandoning it for the idea of a screen porch and new carpeting, but one Saturday in April, we just decided to go.  We decided on our destination, went to Ramblin’s work to check the schedule for availability, and the week we had selected was all clear.  Let the planning commence.

By Sunday, we had our plane tickets and reservations at our three places to visit: Boston, Salem, and Kittery, ME.

We arrived at our hotel around 2:00pm, stashed the bags, and wandered a few block to find a place to eat.  We headed back to the hotel and plotted our next move.  Ramblin had ordered tickets for a haunted trolley tour (the tour was haunted, not the trolley – well, not much anyway), and it required calling for scheduling.  He reached an answering machine, which did not raise our hopes in getting a response before that night, and the tour only ran Sat and Sun.  About 8 pm, we received a call that they had room for us on the 9pm tour, so off we scooted.

The tour included costumed guides and visits to some of Boston’s spooky landmarks, including two burying grounds. It was very enjoyable and entertaining.  We got back to the hotel around 10:30 and watched some TV before falling asleep. (Ramblin watched TV, I fell out fast)

We had big plans for Day Two, so we were up and out the door at 8am, with a quick stop at one of Boston’s 7524 Dunkin Donuts.  Sunday held a visit to the New England Aquarium, but most exciting, a whale watching cruise.  It was absolutely amazing.

Even though we had walked a fair amount in Boston, on Monday we got the grand trolley tour.  We used one of these in DC, and it is a great way to learn about the city, and since you can hop on and off, use it as a convenient form of transportation.  Much of the tour follows the Freedom Trail, a marked 2 1/2 mile route that features 16 or so famous places.

This was our last day in Boston, and we had a few things we needed to finish up.  One was the Museum of Science (because we’re both geeks that way), and we wanted to see the southern loop of the trolley, which included the Boston Tea Party site (closed for renovation which we knew ahead of time, though we hoped to see at least a marker – nope).  We also finished up souvenir shopping, then boarded a train to our next destination.  I have to say, Boston is the most public transportation friendly city.  We didn’t have a car the whole time we were there, and never felt like we were unable to go where we wanted.

Come on, are Halloween junkies going to the east coast without a trip here? 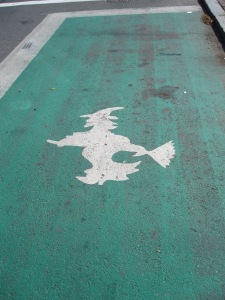 Salem is a beautiful little town.  We stayed at The Morning Glory Bed and Breakfast and had the most wonderful hosts, Bob and Marcel.  We were less than a block from Salem Harbor, and on the second night (we did experience a couple of days of unseasonable heat), we were able to open the windows and be lulled to sleep by the gentle clanging of the buoy amidst the waves.

Of course, we made treks to the various witchy attractions, but my favorite was the Salem Witch Memorial.  (Remember my fondest for the FDR memorial?  Words carved in stone get me every time.)

All too soon, it was time to leave Salem for our next ‘port of call’. (Ragged and Cynical just got back from a cruise, and I’m totally stealing the lingo)  This was the place that I was most excited about going.  Why, given all the fantastic things we had planned?  Our freshman year, The Most Excellent English Teacher in the World gave us a writing assignment to choose any other state in the US, research and plan a trip for $2000.  I picked Maine.  Granted, I didn’t get to do everything from that assignment (and I kept it, of course), but what we were able to do made me love it even more.

What did we do in Maine?

And that was the beauty of it.